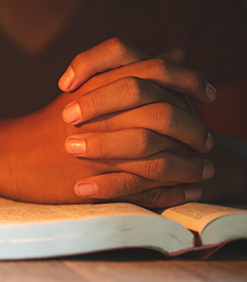 The leaders of these schools were reawakened to the dual crisis of democracy and Christianity in America, the historic witness and experience of the Black Church and Black Theological Schools, and were determined to offer distinctive resources in response. The current crisis in America provides opportunities to respond in significant ways to an unparalleled situation with faithful creation, cultivation, preservation and dissemination of the knowledge, wisdom, culture and practice that has long sustained the Black Church and theological schools. The model of the Collaborative is to prepare Christian denominations associated with the schools to better serve the congregations and the public. The denominations participating in the Collaborative include: The African Methodist Episcopal Church (AME), the African Methodist Episcopal Zion Church (AMEZ), Baptist General Convention of Virginia, Christian Methodist Episcopal Church (CME), Church of God in Christ (COGIC), General Baptist State Convention of North Carolina Baptist, and the United Methodist Church.

Founded in 1865, Virginia Union University was established to give newly emancipated slaves an opportunity for education and advancement. In 1867, four institutions that had served as centers of strength for the Black Community – Wayland Seminary, Hartshorn Memorial College and Storer College came together to create Richmond Theological Seminary, holding classes in the Lumpkin Jail, which had served as a holding cell for runaway slaves. After three decades of operating independently, Richmond Theological Seminary and Wayland Seminary merged on February 11, 1899, to form Virginia Union University. In 1942, the School of Theology was established, which later became the Samuel DeWitt Proctor School of Theology in honor of Dr. Proctor, who had served as University president and dean.

Hood Theological Seminary, sponsored by the African Methodist Episcopal Zion Church (AME ZION), bears the name of Bishop James Walker Hood, a renowned bishop who inspired others in the denomination to join him in creating an institute for the training of Negro youth for Christian ministry. In 1879, these pioneers created Zion Wesley Institute, which in 1887 became Livingston College. Hood divested from Livingston College in 2001. Zion Wesley Institute was founded in Concord, North Carolina, and relocated to Salisbury by invitation of the citizens. Hood became a free-standing seminary when it moved to its current space in 2005.

Shaw University Divinity School in Raleigh, North Carolina, is the first historically Black institution of higher education in the southern United States. The University was founded in 1865 by Henry Martin Tupper, a graduate of Newton Theological Seminary. Rooted in the Baptist Church, the School of Divinity is a central pillar of the University’s connection to the church preparing men and women for Christian leadership and education, Christian heritage, cultural awareness, ministry of identity and social justice.

A product of the growth and educational commitment of the African Methodist Episcopal Church, Payne Theological Seminary is one of the oldest free-standing Black seminaries in America. Founded in 1891, Payne is named for the second Bishop of the AME Church and the first dean, Bishop Daniel Alexander Payne. Located in Wilberforce, Ohio near the sacred waters of Tawawa Springs, Payne sits at a crossroad of the historic struggle for justice and the dignity of all humankind. Since inception, Payne has taught and practiced the servant ministry of social liberation.

Founded in 1959, Interdenominational Theological Center (ITC) is a consortium of five Black Christian denominations – Christian Methodist Episcopal, Baptist, African Methodist Episcopal, United Methodist and the Church of God in Christ. Located in the heart of Atlanta, ITC welcomes faith traditions interested in preparing practitioners for service in the church and community. ITC molds preachers, pastors, lay leaders and teachers, with a unique model of program delivery that is exclusively African American.